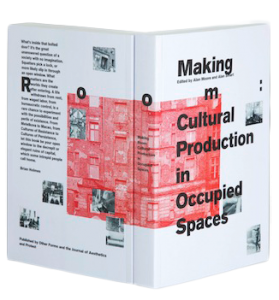 Edited by Alan W. Moore and Alan Smart
Designed by Other Forms
Co-published by Journal of Aesthetics & Protest and Other Forms

“What’s inside that bolted door? It’s the great unaswereed question of a society with no imagination. Squatters pick a lock, or more likely slip in through an open windo. What matters are the worlds they create after entering. A life withdrawn from rent, from waged labor, from bureaucratic control, is a rare chance to experiment with the possibilities and perils of existence. From Metelkova to Macao, from Cultures of REsistance to Culters of PErsistence, let this book be your open window to the decrepit or elegant runis fo capital, which some intrepid people call home.”
– Brian Homes.

Making Room: Cultural Production in Occupied Spaces is a first of its kind — an anthology of voices from the post-1968 squatting movement in Europe which is focused on creative production and cultural innovation. Is squatting art? It is certainly a tactic which has enabled a tremendous body of collective work in culture to be done, and new kinds of lives to be lived. Making Room lays it out in the words of those who did it and study it.

The dark matter undercommons of disobedient culture surveyed in this book begins its roam in a theoretical introduction including autonomist theory, the ways of “monster institutions” and simple economic justice. Then it moves from north to south, portraying by country the specific local conditions of an international movement.

The book is organized by country; Netherlands, Denmark, UK, Germany, Italy, France, Spain, Anywhere, Elsewhere. Memories and thoughts are driven from so many historic squats, including; La Casa Invisible, MACAO, La Miroiterie, Teatro Valle, Gängeviertel, Rote Insel, Stutti, The House of the Process Church, The Youth House and others.

Besides great narratives and pictures, there’s a wide diversity of approaches to the text, check out just some of these article titles: