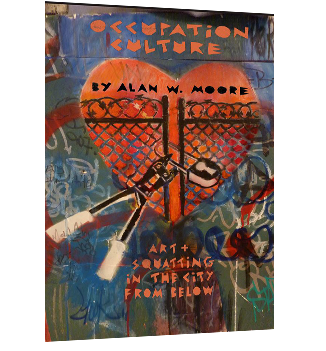 Occupation Culture: Art & Squatting in the City from Below

Alan W. Moore is in the USA this summer and early fall to tour his new books, “Occupation Culture” and “Making Room”. Both of these books concern political squatting, mainly in Europe. Both are available in print and online as PDFs for free. Occupation Culture is the story of a journey through the world of recent political squatting in Europe, told by a veteran of the 1970s and ‘80s New York punk art scene. It is also a kind of scholar adventure story. Moore sees with the trained eye of a cultural historian, pointing out pasts, connections and futures in the creative direct action of today’s social movements.

Occupation Culture is based on five years of travel and engaged research. It explicates the aims, ideals and gritty realities of squatting. Despite its stature as a leading social movement of the late twentieth century, squatting has only recently received scholarly attention. The rich histories of creative work that this movement enabled are almost entirely unknown.

Both these books come out of a long-term information project called “House Magic: Bureau of Foreign Correspondence.” The project is blogged at “Occupations and Properties.” Many of the contributors to the Making Room book are members of the SqEK research group on squatting in Europe, which held its conference in Barcelona in May of 2015. The Making Room anthology was presented there, with an exhibition which will be repeated in September at ABC No Rio in New York City.

This September, begins the exciting New York leg of the tour. While nearly all events are listed on this website, the most up-to-date information about all of them with hyperlinks in one place is in the blog post on my “Occupations & Properties.” Hope to see you there!

“Occupy wasn’t just a movement, it is a long-standing strategy and, frankly, a form of living. Alan W. Moore has seen firsthand more squats and occupations than anyone, and he brings his sensibility to bear on this global phenomena. A must read for occupiers, whether artist, activist or renter.”

“For decades, Alan W. Moore has been an inexhaustible resource at the nexus of art and squatting, pumping out an archive through magazines, books, and art installations. Part memoir, part historical account, Occupation Culture is his newest burst of energy, surging into the squatter-artist canon to spend eternity alongside such well-respected contemporaries as Seth Tobocman, Fly Orr, and Eric Drooker – all of whom make appearances.”

Hannah Dobbzauthor of Nine-Tenths of the Law: Property and Resistance in the United States (AK Press)

“Reporting on close to 40 years of exploits Alan W. Moore’s Occupation Culture is no academic treatise but a Picaresque adventure story filled with both detailed observations and broader reflections on the political and cultural significance of art and squatting that stretches across the Atlantic from the United States to Europe.”

Gregory Sholetteauthor of Dark Matter: Art and Politics in the Age of Enterprise Culture