The most developed presentation I’ve made so far took place in Grand Rapids 8/5/15, thanks to the enthusiasm of Paul Wittenbraker, who teaches community engagement to artists in that city. (He’s an associate professor at Grand Valley State University,vGVSU.) We arrived in the sprawling urban area the night before, and parked in a weird hotel on a hill surrounded by hospitals. We got lost on the dark roads trying to find dinner… then moved into the city proper along Division Street. I was later told it was at one point the longest commercial street in the USA, and today it is a museum of businesses and old hotels, now running weekly and monthly rates for the immigrant workers of the city. 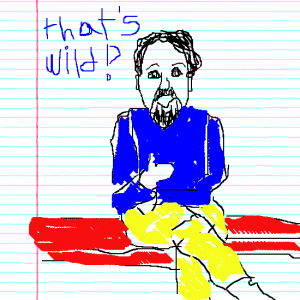 Once we passed Wealthy Street (“named for a person,” we were told later) we entered the center of the city. Unsurprisingly, it has many vacant buildings, although everything seems pretty well kept. This was a grand avenue in its day, studded with churches and many fine brick buildings. Later on Jenn Schaub, who wields mysterious power over the arty end of the street, told me that Grand Rapids was a center of the furniture industry back in the day. They held grand expositions until about the middle of the 20th century. (I don’t know the names of 19th century makers, but Stickley Brothers was here for 50 years, making Arts & Crafts style pieces.) One side of Division Street downtown has 19th century buildings. The other side was demolished when the street was widened, and rebuilt in the 1930s.

Blue hair notwithstanding, Jenn is a kingpin in the Grand Rapids Avenue of the Arts development, which has put numerous artist live-work studios and storefront projects along Division Street. These folk share their street with the denizens of numerous social housing projects, many of them quite precarious (recovering alcoholics, indigent, etc.). A back window at the Avenue for the Arts storefront space looks directly onto the common room of one large housing complex. A colorfully garbed Vietnam vet waved cheerfully when Jenn pulled back the curtain.

All of this is the result of a partnership between a social housing development group and artists organizations. It’s complex, and I didn’t take notes, but this development has some very interesting features, like a folk art gallery that draws on the talents of the constantly shifting crowd of homeless. (It was closed when we were there, and there was no time to return and check it out.) We did pop into a storefront (I’ve forgotten the name, sorry) which featured a wide range of quirky DIY goods in the front, and in the back a fabric artist working away on a piece during her in-store residency.

We stayed the night with Hugo Claudin, a painter and a percussionist who lives in one of the first live/work studios in the Avenue for the Arts. He runs it as a music and performance venue called Mexican Sans Frontieras. He’s bilingual, so Malena had a respite from English chatting with Hugo and his Cuban roommate. 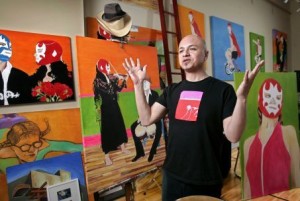 The gig was good, with an engaged crowd including artists, people who ran cultural venues, and anarchists. Tabitha Gibbs worked diligently to make it all run smoothly, and posted the sound file of my talk lickety split. Paul and Jenn both seemed pleased. “It got people talking together who don’t normally meet,” Jenn said. I have to be happy about that. I even sold a few books!

Rex Larsen | The Grand Rapids Press
Hugo Claudin, a painter and a percussionist who lives in one of the first live/work studios in the Avenue for the Arts along Division Avenue

My Tweets
Flint: Too Late but Not Forgotten Circulating in Milwaukee
Scroll to top