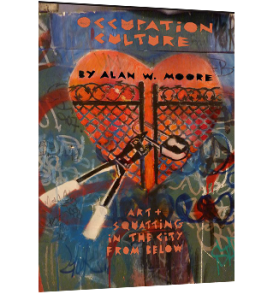 Occupation Culture: Art & Squatting in the City from Below
Alan W. Moore

Occupation Culture is the story of a journey through the world of recent political squatting in Europe, told by a veteran of the 1970s and ‘80s New York punk art scene. It is also a kind of scholar adventure story. Alan W. Moore sees with the trained eye of a cultural historian, pointing out pasts, connections and futures in the creative direct action of today’s social movements.

Occupation Culture is based on five years of travel and engaged research. It explicates the aims, ideals and gritty realities of squatting. Despite its stature as a leading social movement of the late twentieth century, squatting has only recently received scholarly attention. The rich histories of creative work that this movement enabled are almost entirely unknown.

Occupation Culture: Art &amp; Squatting in the City from Below

Link to abstracts of all chapters of “Occupation Culture”: