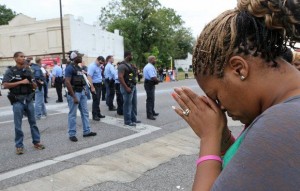 I’ve been spending lots of time this U.S. trip in Milwaukee as my mother is gravely ill. It’s a central spot for touring and planning, hiding out and lazing about. But it’s not like nothing is happening here. I gave a talk at the Peoples’ Books Cooperative store here, part of a network of co-ops in the diverse Riverwest neighborhood on Milwaukee’s east side. We’ve joined the food co-op, dined at the funky vegan cafe, and hung out at the Public House tavern. Yesterday we had the Sunday “bicycle brunch” there — drinking cider and white wine, watching the green market in the adjacent common through the window as we waited for delivery of vegan food from the cafe.

Susan Simensky Bietila showed up. She’s an artist with World War III Illustrated comics, and a long-time movement vet who wrote of her experiences in the Christadora building squat on the Lower East Side for House Magic #6 issue on New York real estate. Susan has been supporting demonstrations in Milwaukee against the “bomb trains” of crude oil, which are moving through the Midwest on rail in lieu of pipelines. (I link to an Ohio activist’s trainspotting of these things.) I saw one of these roll through Milwaukee on the 4th of July — long, black, graffiti-less (high security, yea), and presenting the prospect of a fireworks event that could burn down a city.

At the bookstore, Susan spoke of communal past houses in Milwaukee — the picture posted here is a mural from one of those, in the early ’00s, an image by Chicago artist Iris Pasic of anarchist super-heroes throwing squat vibes at a distant skyline…. And Andrew came, who I’d met at the book talk about the new Invisible Committee book “To Our Friends” spoke of a squatting attempt his group had made some years ago. It was quickly evicted, and they did not try again. I’d seen Andrew again at the IWW picnic in July. I was invited by Jacob Glicklich of that group, and I’ve talked more with him, but that hasn’t gone anywhere — so far.

Last weekend we went to another picnic at the Peace Action building in Riverwest, where I talked archives with some of those folks who were soused on some potent mango punch. The Peace Action anti-war group has been operating since the Vietnam War era. It’s an outgrowth of the Mobilization for Survival, the “Mobe” of those days, which organized the biggest anti-war marches in U.S. history before the Iraq War protests. (I know Peace Action from those post-9/11 days in Staten Island.) The Mobe was well-funded, and they had an office in downtown Milwaukee when the City decided to condemn the building for a parking garage. Despite they were only renters, the group got a generous relocation grant, and decided to buy rather than rent. Today they are the only Peace Action group in the country which owns their own building. The picnic was celebrating their new initiative, a modest community garden in their formerly derelict backyard.

We also met at the Unitarians’ North Church with a couple of activists who had just returned from the anniversary of the gun-down of Mike Brown in Ferguson. They went with a group of Unitarians “standing on the side of love.” Even that is risky these days in the ‘burbs of St. Louis.

Mary Devitt has been active in the Black Lives Matter movement, standing with the mother of a Milwaukee victim, Dontre Hamilton. The mothers have marched in Washington, and most recently in Ferguson. Mary recently spoke at North Church on the theme “How to Be White in the ‘Black Lives Matter’ Movement: It’s Not All About Us”.

Her husband, John Hagedorn, is a gang researcher. He’s just published a new book, The In$ane Chicago Way, which details a recent history of the imbrication of the Mafia, Latino gangs, police and Chicago politicians. In his blog, John sees Ferguson and some surrounding communities as undergoing essentially an American intifada. In Ferguson, “every night for year kids have been confronting cops.” While the police were solicitous of organized marchers during the daytime, handing out bottles of water in the stifling heat, at night they “show up with overwhelming force to any violence.” They arrest people indiscriminately, and like a perverse and violent game show, the police department reaps funding from the fines and monies they extract from prisoners. At this point, “nobody believes the police” account of any incident, like the recent shooting of Mansur Ball-Bey in St. Louis during a raid on a drug house — shot in the back as he tried to get away.

Now we really want to go to Ferguson.

Photo: Rhonda Tunstall, 40, prays for peace in the middle of the street as police move in to disperse the large crowd gathered at Page and Walton, Wednesday, Aug. 19, 2015 in St. Louis. An armed man fleeing from officers serving a search warrant at a home in a crime-troubled section of north St. Louis was shot and killed Wednesday by police after he pointed a gun at them, the police chief said. (David Carson/St. Louis Post-Dispatch via AP) EDWARDSVILLE INTELLIGENCER OUT; THE ALTON TELEGRAPH OUT; MANDATORY CREDIT (David Carson)

Some recent writing on the dense history of St. Louis-area segregation behind the Ferguson uprisings (background rarely mentioned in mainstream accounts):

Bryan Jack, “’A Northern city with Southern characteristics’: Ferguson and the History of Race Relations in the St. Louis Region,” 10/1/14 at British American Studies website: http://www.baas.ac.uk/usso/the-ferguson-protests-and-the-racial-environment-of-the-st-louis-region/

Analysis and ‘what to do’ from anarchist point of view:

Crimethinc, “Ferguson and Beyond: Confronting the Police and White Supremacy,” Rolling Thunder #12, Spring 2015